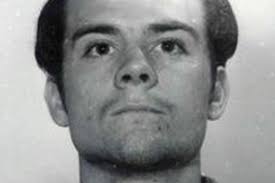 Born into a strict Roman Catholic family, Herbert Mullin began life on April 18, 1947 in Fenton, California. Herbert was a good child, excelling in school quickly and was voted “most likely to succeed” by his high school chums. He was athletic, fit, and very handsome, always helpful and polite to others. His only strange distinction was his oddly close relationship with his best friend Dean Richardson. Just out of high school, at 17, Herbert became engaged to his longtime girlfriend, intending to begin a life with children and a little household.

At 18, Herbert’s life suddenly crumbled when Dean was killed in a car accident. Devoted deeply to Dean, Herbert mourned the loss of his friend in bizarre ways. Lovingly setting up a shrine for Dean in his bedroom complete with photographs and trinkets and old toys, Herbert could not seem to get past his grieving for Dean. He broke up with his girlfriend, announcing that he was a homosexual. Dean’s memorabilia was never removed from Herbert’s bedroom from then on. Around this time, Herbert’s family began to discover strange behavior in Herbert. Though it is unknown if there was a history of mental illness in the family, Herbert began having fits of echopraxia, a well known symptom of schizophrenia. His manner became erratic as well. Herbert preferred to be alone as often as possible, talked to himself, believed others were plotting against him and continuously thought he was being followed by someone that wanted to harm him. To calm himself, Herbert turned to hallucinogenic drugs, thinking they might oppose the gradual confusion that was blocking his thought processes. The drugs only worsened his thought patterns, the limb he was desperately clinging to beginning to slip quickly from his grasp.

After seeking out a doctor, Herbert disclosed his symptoms, believing he might be going mad. The doctor diagnosed Herbert with severe paranoid schizophrenia, and he was placed in a mental hospital for a year. When treatment proved to be working, Herbert started to feel better and well enough to leave the hospital. Like many sufferers of diseases, especially ones that affect the mind, Herbert must have stopped treatment soon after he left the hospital, for the voices in his head began to haunt his psyche again. This time, it wasn’t just the usual voices telling him to do unpleasant things, it was Satan himself, urging Herbert to kill. On October 13, 1972, Satan sent Herbert out onto the streets to find a suitable person that must be annihilated. The prey was chosen apparently at random, as were all of Herbert’s victims. Herbert found a lowly tramp named Lawrence White, searching thorough a garbage can. Clubbing White to death, Herbert found that Satan was not satisfied with only one kill. Herbert would have to again find another person undeserving of life, and he did, two weeks later. A Santa Cruz University a student named Mary Guilfoyle, enjoying a long walk in a park, found herself face to face with Herbert. Seeming wrong and disagreeable in some way, Guilfoyle attempted escape from the man following her. Herbert produced a long knife and stabbed the girl repeatedly until she was well beyond death. With the comforting words of Satan whispering in his ear, Herbert continued his slaughter by pulling out her insides and leaving them scattered all around her body.

Not long after Guilfoyle’s death, Herbert found himself conflicted with what he had done. He understood that something was wrong with killing, but not his intent. Satan had orchestrated all of the horrid acts, and Herbert decided that he must be stopped. To rid his conscious of guilt, Herbert sought out a priest to talk with. He confessed everything he had done, omitting no details. After speaking about what he had done, Herbert was not only horrified with his crimes, but slightly and clearly began to hear Satan’s slow whispering in his ear again. Satan commanded the blood of the priest, and Herbert realized that the priest might go to the police about the recent killings. Herbert, in his diseased mind, had only one choice then. He stabbed the priest to death in the confessional, left the body to be found later, and went on his way. In December of 1972, Herbert began a rampage that shocked all of Santa Cruz. Buying his first gun, Herbert had been told by Satan that this would be a cleaner way of killing, and Herbert could get away with it easily. In one day, Herbert shot five people to death, two of them small children. He was never identified because his victims were his only witnesses. Satan continued to converse with Herbert, telling him that his crimes were for the good of mankind. There was going to be a great earthquake, Satan warned, and Herbert’s victims were grateful to be taken before the disaster could occur. Herbert maintained that what he was doing was good, helpful, and actually a good idea. The next five murders occurred within two weeks of each other, showing the severity of Herbert’s psychotic episodes related to his schizophrenia. After finding four teenagers camping out at Cowell State Park in Santa Cruz, Satan allowed Herbert to shoot them all, assuring Herbert that he was doing a fine job. The final murder that took place was on February 13, 1973. An old man, tending to his garden was shot by Herbert as he passed in his car. Luckily, a neighbor was present at the time and was able to write down the registration number on Herbert’s car.

Not long after the police were phoned, Herbert was hauled into questioning by police. Mullin confessed to all 13 murders, telling police that Satan was the mastermind behind it all. The lawyer plead with the judge that Herbert could not be guilty because he was insane. Herbert told the police that he was trying to save California from an earthquake by killing innocent people. The jury saw Herbert fit to stand trial and was charged with 10 murders, found guilty on two counts of two counts of first degree murder and eight counts of second degree murder. In July 1973, Herbert Mullen was sentenced to life imprisonment, eligible for parole in 2025. Classified by professional doctors as a common example of a severely violent paranoid schizophrenic, Herbert Mullin was not given the right or the opportunity to serve out his sentence at a mental hospital, where he could be medicated properly and guarded for any signs of deviance. Without treatment, Herbert’s condition may not only worsen, but ruin him completely. His pal and constant companion, Satan, might continue to hurt and ultimately advise Herbert to kill others or himself.