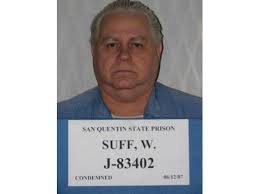 William Lester Suff, also known as the Riverside Prostitute Killer, and the Lake Elsinore Killer, is an American serial killer. Between 1986 and 1992, he murdered at least twelve prostitutes in Riverside, California. In 1995, a jury found that the unassuming-looking middle-aged man had picked up street walkers in his van, then strangled or knifed them, and proceeded to do unsettling things with their corpses. His conviction appeared to bring to a close a six year-long manhunt for the so-called “Riverside Prostitute Killer” wanted in connection with the slayings of 19 prostitutes. Riverside’s long search for the prostitute killer led to Suff’s arrest. On January 9, 1992, police cruising the prostitution district saw a van stopped along curbside, where the driver had a conversation with a woman on the sidewalk. When the van pulled away suddenly and made an illegal U-turn, police stopped it. Although they arrested Suff for driving with a suspended license and lapsed vehicle registration, what he had inthe back of his van was the break detectives had been looking for: a rope, sleeping bag, and bloody knife.